... to the Department of Electrical Engineering and Information Technology (FB EI)

Questions regarding your studies? Our Secretary's office is at your service [Get in touch]

Dear Freshmen, follow this [link] for all relevant first-semester-information !

Have a look at videos about our study programs, field trips or this year's summer fest [more]

Enjoy your studies with the help of 17 professors, 15 employees and a number of lecturers

... Internet of Things. Find out more about the trendsetting topics we shape together [here]

GETTING TO KNOW THE INDUSTRY

Follow us on europe-wide field trips to learn directly from the industry.

As part of a research project of the "Information and Communication Engineering" Master’s degree program, EI and IEM department, a hexacopter was modified with an additional communication and geolocation module. This drone can now be utilized for air quality monitoring in future projects.

During winter semester 2016/17, our students Fabian Berg and Miklas Münke have built an automated brewing system as part of a project supervised by Prof. Schröder. It will serve as a tool in various future laboratory experiments in the Process Monitoring & Control lab (LET). Miklas Münke reports:

First and foremost, foundational knowledge in brewing is required for the overall conceptualization of the plant. After analyzing a variety of brewing methods, we transitioned into the planning phase. We decided to equip the plant with two containers – one for mashing and the other one for lautering. The mashing container required a heater, a stirrer, as well as a component for temperature and fill level monitoring. For the lautering container, we originally planned to utilize a component for temperature monitoring and a component for once-through cooling. But since the latter was not necessary, we decided to do without it.

As part of a project work, Niko (a 6th semester automation technologies student) installed a hydrogen fuel cell for the EI department during lecture breaks. He had to read through manuals, search through a pile of individual device components provided by the department, and had to improvise occasionally utilizing the soldering bolt.

After a few days, the Nexa 1200 cell power unit was already up and running in a fully functional state. Now, the task was to conceptualize, test and document possible experiments.

In order to meet society’s increasing demand for biological and ecological cultivation and food, our students Viktor Jaritsch and Michael Brockmann developed an automated greenhouse as part of a project supervised by Prof. Dr.-Ing. Frey. Besides a rich harvest, the greenhouse is to control essential parameters such as air circulation, lighting conditions, temperature, irrigation, and fertilization on its own. 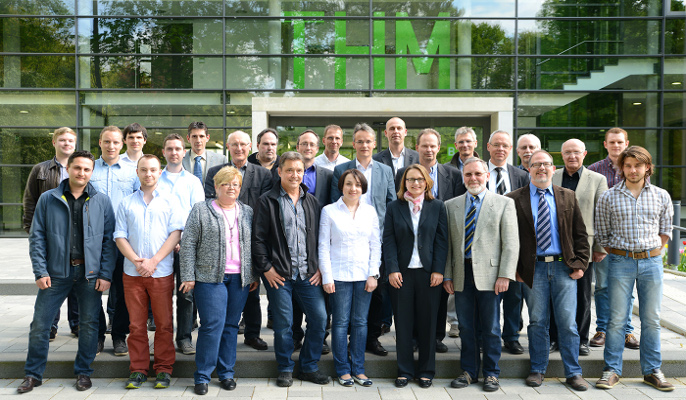 ...TO THE DEPARTMENT OF ELECTRICAL ENGINEERING AND INFORMATION TECHNOLOGY!