Niko (21) has been studying Automation Engineering (B.Eng.) since the completion of his A-level education in 2013 and is currently in his sixth semester. He is one of our department's student assistants and explains why AUT is a good choice.

AUT - "Something about robots and assembly lines?" 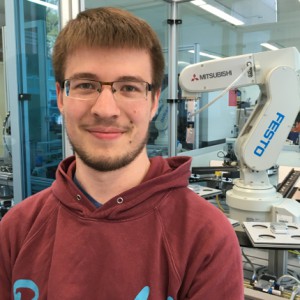 When I began studying, the only thing about automation technologies I could think of was the vague idea of "something about robots and assembly lines". I figured out what it meant through the courses process control and control technologies, though.

In process control, I learned the full meaning of "automation", and about later career opportunities for automation engineers.

Automation means that a process is automated to the extent that it can be repeated over and over with identical results. As an automation engineer you not only have to focus on implementing individual processes, but also how they function within the larger system - more often than not, a process is related to pre-established or parallel processes.

Controlling and managing automated systems and process controls requires knowledge in control technologies. Additionally, actuators and sensors - quintessential for automation technologies - are studied in the courses for electrical machines, measurement and sensor technologies.

I'm very happy with my decision to study automation engineering, as I realized during the course of my studies that I can work in a variety of fields related to electrical engineering after graduation. For example, I could see myself working as a developer in a project group for automated production.