Adalbert (29) is currently in his fifth semester of Automation Engineering (B.Eng.). Prior to his studies he trained as an industrial electrician, and then to become a goverment certified technician. After that, he worked for four years. At the beginning of his studies he encountered severe problems with physics and mathematics.

You have to study mathematics intensively, as almost every subsequent module builds on this foundation. 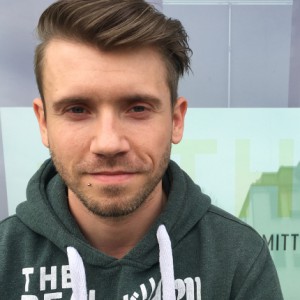 My problem with mathematics was the lack of prior knowledge. In order to qualify for higher education as a trained engineer, I had to take an additional course and pass an additional exam. This course's teacher was not very interested in teaching the necessary foundations and his lectures were not up to par. At that point in time I was okay with it, as it meant less work for me. But it took its toll when my proper studies started.

Before my studies began, I attended a bridging course in mathematics. There I realized my huge deficits. Because of this, I would highly advise attending bridging courses in order to get a feel for your own skill level. There was not a lot of time between the completion of the bridging course and the beginning of my university studies, but I still managed to get a hang of the subject areas I had previously struggled with the most.

In retrospect, I think one of the main reasons I failed the exams the first time was that I did not invest enough time to recap lectures and preparing for assignments. With a subject as complex as this, it is not enough to simply attend thhe lectures and reread the script right before the exams. You have to study mathematics intensively, as almost every subsequent module builds on this foundation.

As a result, in the next semester I had to prepare for one extra course so I did not have to postpone further modules. Consequently, I failed Mathematics II. The same went for the third semester's Transformations course (Mathematics 3). The problem with all of this is that you're hardly able to attend lectures from the previous semesters because of overlapping courses. That is why it is important to not only stay in contact to students in the higher, but also in the lower semesters as well. This way, information flows in both directions and study groups are formed.