Fabrice (24) is currently in his sixth semester of Automation Engineering and Electronics (B.Eng.) and is a member of our department's robotics working group M.A.M.U.T. Fabrice is from Cameroon and was also entirely new to Germany while still a first-year student.

Be open, ask questions, make contact with other people! Nobody will approach you if you isolate yourself. 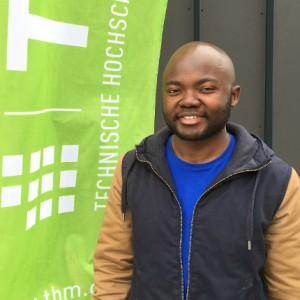 I came from Cameroon to Germany in 2013 in order to study. I had been involved in electrical engineering for four years and had completed my A-level education in Cameroon. When my application got accepted by both THM and University of Applied Sciences Düsseldorf, the choice was an easy one. My sister had also studied in Giessen!

I will never forget my arrival in November, 2013. I felt lonely and sad, but simultaneously happy about finally becoming a university student. I had never lived alone before, nor had I ever cooked for myself. :)

Luckily, my sister had already prepared some things for me: A room at Studentenwerk Giessen and a language course. The latter turned out to be really challenging, but I kept at it, as passing the so-called DSH exam (German language proficiency test) is a necessary requirement for admission to German universities. During all this, however, I already made a lot of friends as I was determined to stay open, instead of being silent or reserved.

Only by being open and approaching people, talking to them, asking them questions and by not being intimidated will you be able to make friends. Because of this, I made use of everything at hand to get to know different people, cultures and languages - and ended up in the International Buddy Programm

In the Buddy Program, first-years can meet later-year students of the same department. This way students who share the same interests and hobbies can support each other best. Thanks to the program, I did not only learn a whole lot, it was also a lot of fun. Furthermore, because of the excursions I have visited various places in Germany, too.